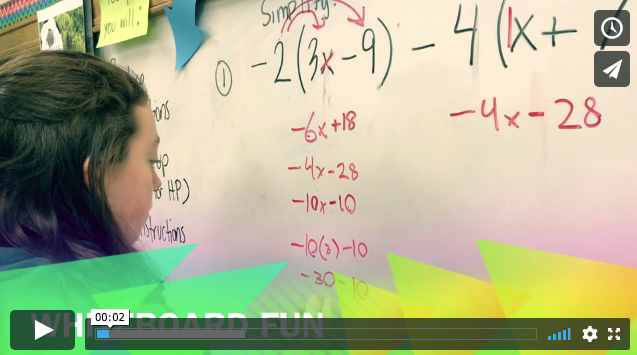 Last week somehow a regular, water based marker ended up on the ledge of one of our whiteboards. I’ve heard tragic whiteboard stories from my own kids over the years about permanent markers being used on whiteboards and ruining them so I immediately panicked. My kids had told me that if you go over the marker in dry erase marker it will come off. I did that. Nothing. Oh dear. Then we thought to try water. Gone. “Oh yes, the marker wasn’t PERMANENT, it was just water based.”

After I got home that day I realized this was a happy accident. There are so many times that I’d love to have a problem or problems persist during the day but instead have to write them again for each class period. How could I use this effectively to offer better instruction? Differentiation would be the first use. I had an idea!!

Yesterday we tried it out for the first time. Our Math 7 class has been working with simplifying expressions for a week or so and we’ve hit the time where we are ready to mix things up and review. I had a station activity planned. Each assigned group would move through 3 stations. At each station they’d have 4-6 problems to do and they’d have a detailed answer key to look through the solutions. We’d move every 8-9 minutes. Some stations were longer or more challenging than others so this is how the permanent problems came in. I told the kids that if they finished early they could pick a problem to do and I’d look at it and see if they had done it correctly before they erased. I also warned them that I’d be taking some video so we could capture this “happy accident” of being able to erase. Some of the kids had a lot of fun with the erasing as you’ll see in the video.

I’m really excited to use this in more areas. I love that it allowed the kids who finished more quickly to do something else that had them moving around the room and kept them from distracting kids who were done. It also served as a motivator to for many to finish in a reasonable time vs stalling out at a station. For me it was also really AWESOME to see the kids using their arrows for the distributive property and circling their like terms. They were very thoughtful with the work up there!!